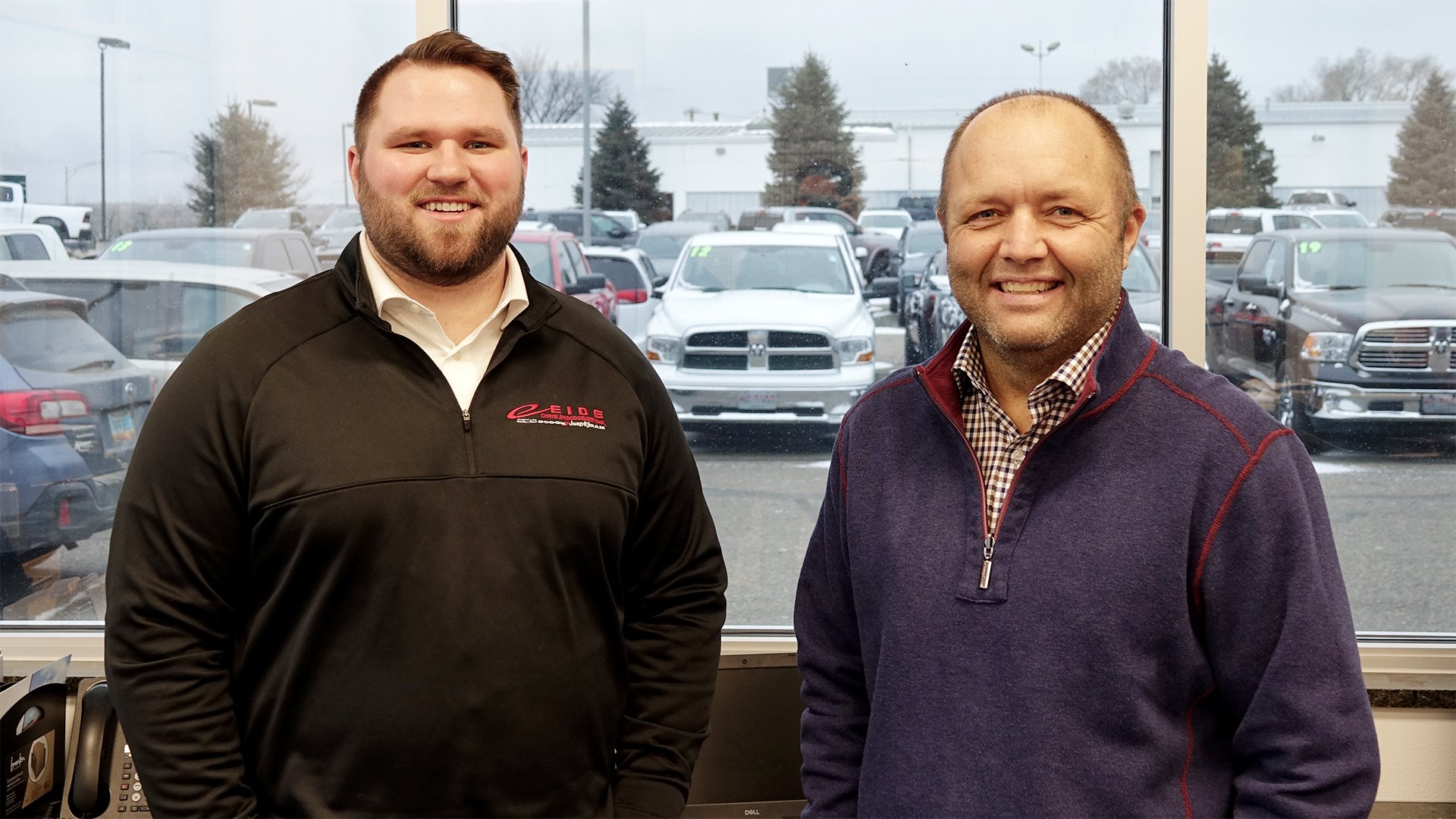 The Eide family of dealerships takes pride in employing great people who, in turn, provide great service to our communities.

That’s why we’re very excited to announce that two of those people have been promoted to management positions at Eide Chrysler!

Don and Aron have truly reflected the core values of the Eide Philosophy, and we’re very excited for their new beginnings.

Along with the new year, Eide Chrysler has promoted one of its own to lead its Dodge, Chrysler, Jeep, and RAM dealership in Bismarck.

Starting as an intern at Eide Ford back in 2011, Don Pask has been through the ranks of both Eide Ford and Eide Chrysler. Pask has served many roles on the sales teams at both stores.

Now, as General Manager, Pask looks forward to continuing the high level of service for which his store is already known.

Don has a lengthy track record of top-notch customer service, and he’s excited to continue building the company’s reputation in his new role.

“I have so much fun at what I do,” said Pask. “Every day is different. It's a new challenge. I love the people that I work with and work for. I've been in the dealership world for almost 10 years, and every time we sell a vehicle, I get an adrenaline rush. I'm addicted to it.”

As part of this exciting transition in leadership, another long-term member of the Eide team is taking on a new role.

Aron Waxweiler, who joined Eide Chrysler as the used vehicle sales manager back in 2018, is now stepping up as General Sales Manager.

An Air Force veteran, Aron transitioned to Eide Chrysler from Eide Ford, where he worked in several roles since 2007.

Now, as General Sales Manager, Waxweiler is excited to help his fellow employees in a new capacity.

“I used to manage vehicles, and now I manage people,” said Waxweiler, referring to his sales management team. “I’m helping my team get the best out of themselves so that we can continue helping our customers and the community.”

It’s no secret that Eide dealerships like to take care of their customers, and this is the number-one priority that Waxweiler has as General Sales Manager.

“We like to take care of people,” he said. “That’s number one. We also support a lot of great causes in the community. Eide is a very fair employer, and the ownership cares about the community. If you’re fair with your customers and your community, they’ll be happy to do business with you.”

Dealer Principal Jesse Peterson is thrilled to have these two Eide team members advance up the ranks.

"I'm very happy to have Don in the leadership position he is in. This is the result of years of planning and development, and he is very deserving of the position," Peterson said. "Aron has also done a tremendous job for the Eide organization over the years, and is also very deserving of his promotion. We're very excited about the team we have going into 2021 and beyond."

At Eide Chrysler, we believe in providing opportunities for our team. We value hard work and caring customer service. That’s why we’re so excited for Don and Aron.