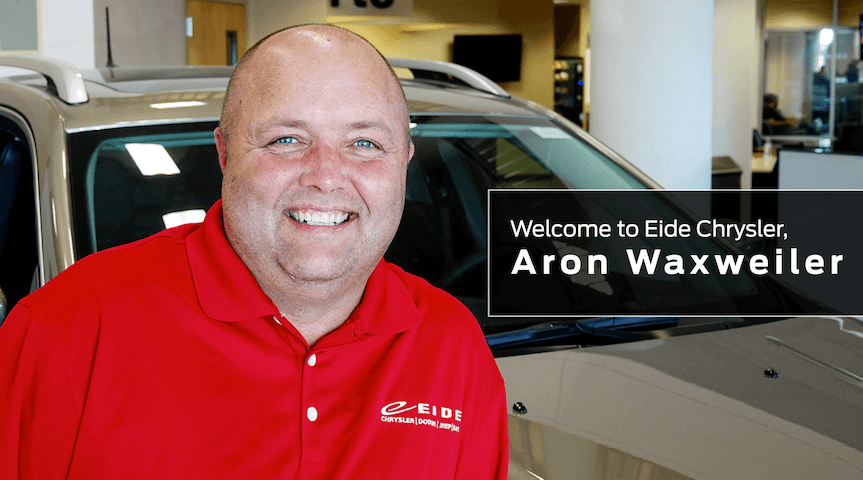 Eide Chrysler has a new face in the Used Vehicles Department, although he's no stranger to the Eide group!

Aron Waxweiler recently transitioned to Eide Chrysler from Eide Ford to take over as the Used Car Manager. While he's been an Eide employee at the Ford store since 2007, many of our Eide Chrysler customers in the Bismarck-Mandan area may not know him.

From North Dakota to Japan... and Back Again!

Aron didn't immediately jump into the auto industry following high school. Instead, he took that time to offer his service to the U.S. and see a bit of the world outside of North Dakota.

After transitioning out of the military, Aron picked up a job selling cars and "never looked back."

"I sold cars in Fargo for six years, and then that dealer bought a Ford store in Washington state, so I moved out there to work in the Finance and Insurance Department."

After two years in Washington state, Aron moved back home and started working for Eide Ford. He continued working in the finance department for two years, eventually transitioning to the Used Car Manager, and then to Internet Sales.

"Now I'm back into Used here at the Chrysler store, so I've worn all the hats!" he says.

By now, Aron's roots in the auto industry run deep, so he has some good advice for customers who are shopping for a used vehicle.

When he's not at the Eide Chrysler dealership, you can find Aron spending time with his wife of six years and two daughters, ages four and two, or spending his free time hunting or fishing.

Next time you're at Eide Chrysler shopping for a used vehicle, be sure to say hello to Aron and ask him about his favorite places in Japan!