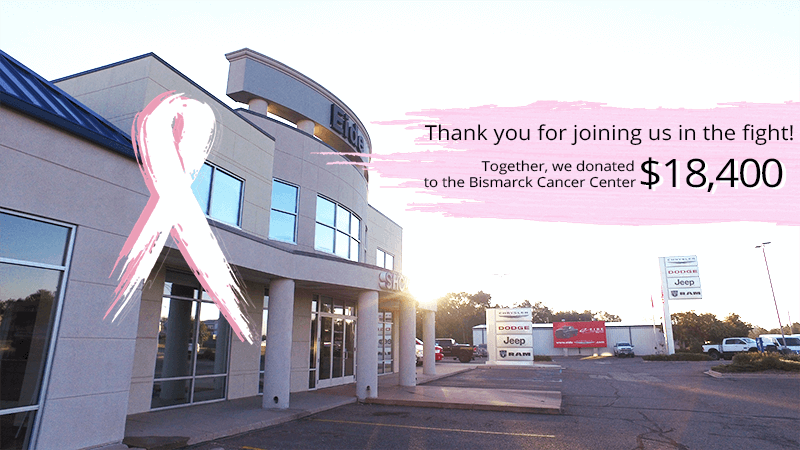 Last month wasn’t a typical month for Eide Chrysler and Eide Ford as we raised $18,400 for our community. We joined national and local organizations in raising awareness for the treatment -- and eventually a cure -- for breast cancer.

This disease has likely affected everyone in one way or another --  from someone who’s been diagnosed to someone who’s gone through treatment or passed away. We all know someone who’s had to battle with cancer.

President and Managing Partner Jesse Peterson of Eide Ford and Eide Chrysler wanted October 2017 to be something more than years past.

Over the years, Eide Ford has supported the Bismarck Cancer Center, a local organization that assists patients with their cancer treatments. This year was very different with the addition of Eide Chrysler to the Eide organization. With two car dealerships working together to raise money for the Bismarck Cancer Center, Jesse knew this would be a record breaking month.

“I had a feeling this was going to be a special year for the Bismarck Cancer Center, knowing our dealerships would work hard to make a bigger difference than ever," Jesse says.

In total for the month of October, Eide Ford and Eide Chrysler raised $18,400 for the Bismarck Cancer Center.

“That day everyone from both stores felt terrific about the contribution. This was very personal for many people including myself and we’re very happy to help," Jesse says.

Thank you to all of our customers who partnered with us during this fantastic month!

Looking for a new vehicle, but didn't get a chance to buy during our October Breast Cancer Awareness event? We always have a great selection of new and pre-owned vehicles here in Bismarck.